The Ancient World Bites Back

I don’t know if you follow Paul Cooper’s twitter account. You really should, and not just because Rivers of Ink is one of the best new pieces of historical fiction I have encountered. Cooper has a predilection to ruins and frequently posts interesting ones. Why am I writing about this? Because a few weeks ago a wonderful capriccio of Grecian ruins got me thinking of how Greece and ruins always seem to go together. 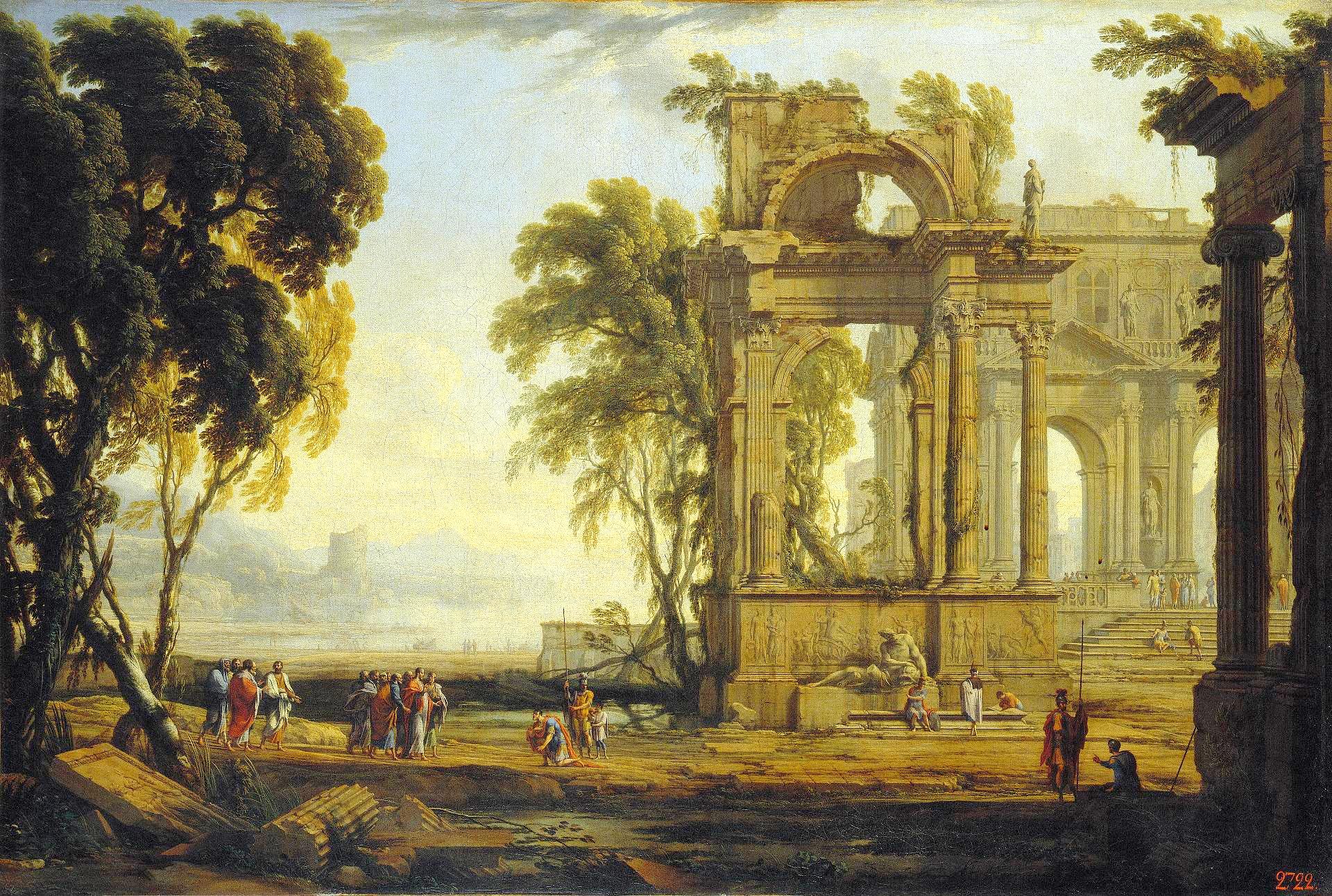 I thought at first of Keat’s famous lines, ‘Heard melodies are sweet, but those unheard | Are sweeter; therefore, ye soft pipes, play on’ but, like a lot of Romantic poetry, they just rang hollow. The point of these sorts of vignettes isn’t that they’re silent but that they’re filled with the wrong kinds of sound. Can you imagine a temple in full use? The sounds (and smell!) of animals, chanting priests, playing children and, sorry to say, toiling slaves. Quite different from disjointed birdsong and rustling leaves.

John Kittmer suggested that the right poem would be Cavafy’s Ionikon and re-reading the poem sort of threw everything into place about how these places often make me feel. I’ll provide the poem below along with a rough translation (I’m a really shitty poet, sorry).

Cavafy has always been a poet of lost worlds. He was writing at a time when the last vestiges of the Roman identity were slowly falling away, and Greeks were by then strongly re-asserting an identity predicted around the classical past.

I’ve always wondered how Cavafy mediated these identities, both clearly had a powerful pull on him. After all, he was a native of a part of the world that, yes, was originally settled by Alexander but grew to be incredibly Romanised. After all, it is in the Roman period (not the Hellenistic, certainly not the Persian) where the native drink of choice in Egypt swaps from beer to wine. The see of Alexandria would be incredibly important in the late Roman world, only beginning to lose eminence to Constantinople when the orator John Chrysostomos was patriarch.

Roman history plays a uniquely important part in Cavafy’s historical poetry. I’m not quite aware of anyone else, Greek or otherwise, who demonstrates such an in-depth knowledge or adroit use of the classical past whether writing about Kaisarion or otherwise nameless minor officials.

Cavafy, then, occupied a very odd space historically. A Greek by descent, language, and education he lived far from the mainland. He was, we have good reason to believe, a homosexual and lived in a culture both eminently orthodox and quite cosmopolitan (his poetry bears influence from many fonts, English, French, Italian…). It is frequently suggested that his recourse to classical motifs in his poetry, particularly in poems concerning young men, allow him to mediate his desires in this culture.

Maybe. Likely even. We tend to take homosexuality amongst the Ancients as read, but this was not always the case. Take the Nomoi (laws) of Gemistos Plethon for example, ostensibly pagan, his recriminations towards homosexuality belay obvious Christian influence. Is it even worth mentioning the readings of the past offered by the Greek far right?

So, Cavafy is the poet of lost worlds – for the irrecoverable splendour of antiquity, for the aching loss of social acceptance, for the collapse of the last vestiges of the Byzantine world, which saw Greeks in Asia minor, the black sea, and Egypt. Ionikon is a great example.

Ionia has always had a strong place in Greek cultural memory. We probably have enough evidence to prove early settlement by the Mycenaeans, many of the big names of classical Greek science and culture (Herakleios, Homer, Herodotos, Panyassis, Xenophanes etc etc) came from there, the area was of colossal importance from the Hellenistic to the Byzantine periods and even post Ottoman conquest, Greeks lived there (and formed the most productive part of society) until suffering genocide at the hands of the Turks.

Reading the poem made me think first of the great death of the archaic world. The Greeks beat the Persians, but the result was a reduction of importance of Asia minor and a substantial change in panhellenic Greek culture. Poetry became gradually less oral, neoteric forms like tragedy took over.

I’ve always thought this a great shame. The fact is Greek tragedy just…well it’s ok. There are some brilliant bits. But compared to Sappho? Homer? Come on.

The second death? Who knows. The Romans brought rejuvenation to the area. Perhaps after Manzikert and the capture of Romanos Digenes? The gradual reduction of Byzantine suzerainty was a new kind of death: The transition from archaic to classical was somewhere between re-incarnation and a c-section. Turkification, a moribund plague or cancer. Naturally, the Latins hardly helped things.

Then there is the final death, which I feel neither like being flippant about nor terribly want to ruminate deeply on. The Greek genocide and population exchange.  After years of Turkokratia this engendered an abrupt change, a sundering, in the life and culture of the region.

Refugees naturally fled westwards, to the mainland, and many Greek cities have neighbourhoods now named after areas in Ionia (Nea Smynri, Pefki, Nea Ionia, tend to be common). Traces of Ionia can still be found in popular folk songs, in food, and in familial histories.

I’ve long dissolved into rambling here, maybe this isn’t quite what Cavafy had in mind when he wrote Ionikon, but it’s immediately what I think of.

If you’re not too bored, I’d implore to scroll back up and take another look at the poem. Or better yet, find an actually poetic translation. What a wonderful invocation of the past that is: the form of a youth  – vigorous and gravid with possibility – none the less frozen in place. At once visible but ultimately intangible. Compare that with Byron’s overwrought “cold relic of departed worth”.